END_OF_DOCUMENT_TOKEN_TO_BE_REPLACED

BARC at the Edmonds City Fair

This was our first year at the Edmonds City Fair (and Classic Car and Motorcycle Show). We got to set up between the City of Burnaby's Emergency Program booth and the RCMP Emergency Command Vehicle. It was a perfect spot. We could borrow power from the generator on the Emergency Vehicle and the Grab & Go kit we were demonstrating was one of the big HF/VHF City kits that Lou, VE7CGE, and Ron, VA7AUZ, put together a while back.

One of the things that I'm always struggling with is how to get people interested enough to stop and talk with us, especially the younger ones ... they're a tough crowd. So this year I did some asking around and searching of the web and came up with a bunch of activities.

In addition to the HF/VHF kit we had a code practice oscillator, a pair of FRS radios, QSL card decorating, Morse Code bracelets using Rainbow Loom elastics, and a big jar of lollipops 🙂

Everything was a hit ... the bracelets for the tweens and teens, the QSL cards for the younger kids, the practice oscillator and lollipops with kids of all ages.

The ARRL website suggests going with beads for the bracelets but I guessed that incorporating the Rainbow Loom stuff would keep things very trendy. I wasn't wrong there. I don't think we had less than three or four people at the booth at any given time.

The funniest part of the whole day was that none of us tending the booth use code. But with the help of the printouts we muddled through and probably memorized a few letters 🙂

A super big thanks go out to Pete, VE7VPK and Ray, VE7RKG for all their help!

(click/tap on any photo to enlarge)

Field Day 2014 planning is well underway and it's shaping up to be another great year. Once again we're getting together with the Coquitlam and New Westminster clubs to showcase our abilities in emergency communications and make as many contacts as we can within a 24-hour period.

This year we're at the Riverview Lands. From Lougheed Hwy turn at Colony Farm Road and follow the signs to BCAS and SPARC.

Members who would like to operate are asked to sign up ahead of time (send us a note if you need the link to the sign-up sheet).

Come on out to our club meetings June 6th and 20th for more planning info.

Able Auctions is selling vintage to modern electronics at the end of March. They are also accepting quality consignment items. See the attached PDF for details.

Our friends in Port Alberni at the Arrowsmith Amateur Radio Club are hosting their biennial Swap Meet on May 31, 2014 in the Alberni Valley Search and Rescue Hall (4790 Tebo Ave, Port Alberni V9Y 7L9).

For table reservations and info email ve7mtv@shaw.ca or listen to the Sunday night net @ 19:30 hrs

Despite the snowy day we had another great swap meet turnout.

We'd like to send a big Thank You! to ICOM Canada, Com-West, Burnaby Radio, and Radiotronics for their generous door prize donations and to all the volunteers who spend countless hours helping with everything needed to put on an event this size.

We would also like to express our gratitude to all the vendors and attendees who showed their support for us by braving the snowy roads and joining us for our annual fund raiser. We couldn't have done it without you!

Congratulations to our Prize Winners 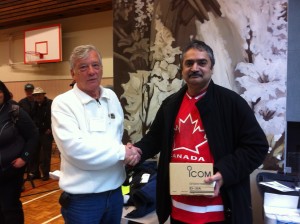 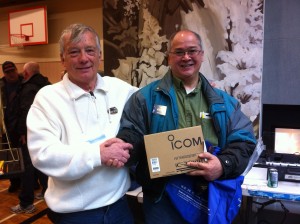 Swap Meet Tables are Sold Out

This year's Swap Meet is just around the corner ... this Sunday actually (how time flies!) ... and it's promising to be a great event. We're back at the recently renovated Queensborough Community Centre  with 2 rooms, over 40 tables, and lots of space to move around. As always, we'll have door prizes (including an ICom ID-31A HT) and a raffle (ICom IC-2300H)

All of our Vendor tables are now sold out. We will be starting a waiting list in case we have any last minute changes.

Hope to see you there!

Not that you needed another reason to attend the AGM ... We are pleased to announce that special guests Geoff Bawden, RAC President, and Bill Gipps, RAC Director for BC/Yukon, will be joining us on Friday, November 1st. After we get the business out of the way the rest of the evening will be for presentations and Q&A.

Everyone is welcome to join us (guests are always welcome at any of our meetings). Hope to see you there!

The North Shore club is inviting everyone to join them at their November 7th meeting with special guest Geoff Bawden, RAC President, and a presentation on Bill's Lesotho DXPedition trip.

The Club repeaters are presently located atop Mt. Seymour.

The VE7RBY repeater system consists of the following:

All repeaters require a Tone of 127.3 Hz